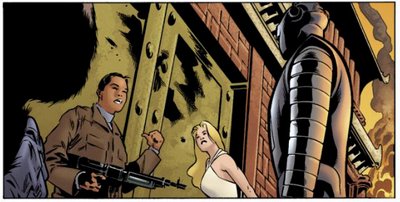 Over at All the Rage/Silver Bullet Comicbooks there looks to be some color previews of those Leonard Kirk AGENTS OF ATLAS pages. She's not mentioned, but the colorist on the book is the unmatched Michelle Madsen, who we were very happy to land. She knows her stuff!

He Flew Too Close... 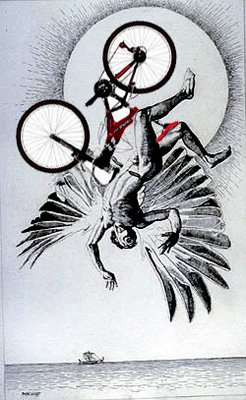 Yes, this week our Mercury Patient is David "Tony Hawk" Hahn, who was having a great time in Colorado whitewater rafting and making four successful jumps off a ramp with a mountain bike. Number five, not so much. If you have an extra clavicle and four ribs, please forward them to our attention.

I went to see Alison Bechdel at Powell's last Thursday, where she read from her new graphic novel Fun Home. It was a terrific event, with a big, enthusiastic crowd. Bechdel's approach to an author reading was perhaps the first successful one I've ever seen from a cartoonist. Fun Home has a clear verbal narrative in the captions and she read these from a typed script while projecting a slide show of the accompanying panels (with their captions cropped out.) It worked perfectly. 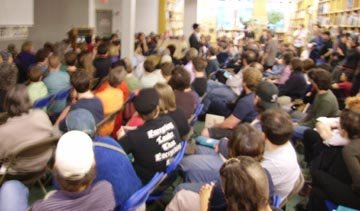 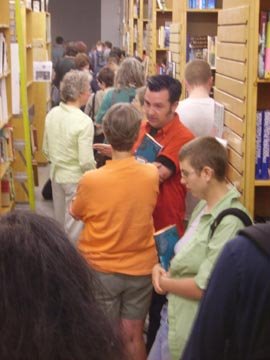 A section of the signing line.

Fun Home just got a great review in the New York Times. And those of you who have read the book might be interested to learn that the Home in question is up for sale. Got $279,000? You can own a piece of literary history.

Tiny Ogre has a review of the Four Letter Worlds anthology. It's a Japanese site so we're not sure what's being said. But thanks to babelfish, here's a rough translation:

The man and woman of the deck which talks together with Christmas and the coffee. Respectively the cover り which is not relation above the so far good friend with the sweetheart. But, today circumstance had changed.... (Anew) It is short the compilation of page 8 word of 4 letters such as "Love" "Hate" is designated as subject 16 these recording. It is the anthology which has the reading answer which gathered the capability group chestnut thornback tar which participates mainly with independent system. This kind of with the compilation strange of the scene carrying has influence shortly. From the point of view of such viewpoint, "Fell" "of COOL", Steve Lieber of J. Torres/R. John Bernales, and "Anew" of Chynna Clugston was good. Especially in the emotional rust "of Anew" the extent which is struck the chest. Also it is impressive for Robert Kirkman to be unexpected and inactive. Perhaps him the accumulation of description, in other words it is the lighter/writer which one shot compared to makes serial ones proud. The Oni Press authorized personnel has occupied the majority, but it probably is the choosing a person of Eric Stephenson? It is good hobby.

Steve saw The Mountain Goats play at the Doug Fir on Saturday and sent back this brief report: 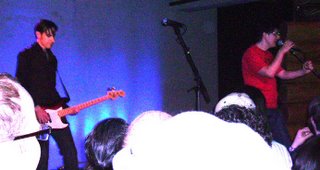 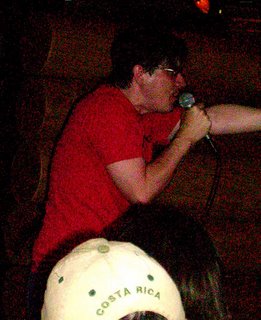 John Darnielle playing the latest encore I've ever seen. There was a conventional encore: "Thanks everyone! Goodnight!" Then the house lights went up and the sound system went into "get out of here" mode, playing tepid recorded music to exit by. This went on as usual, and people were getting in the t-shirt line and filing up the stairs to leave, when the band responded to the still-stomping crowd by coming out onstage again. Darnielle said they wanted to play one more song, one that bassist Hughes had written and that he, John, didn't know how to play yet, so he was just going to sing with the bass. There was a confusion as people who had left the room realized there was still some live music happening, and a bit of polite scrambling for position, but no real crowd-control problems. The song was great- a fun, creepy number sung from the p.o.v. of a nightmarish houseguest. Then they got offstage and a tech guy quickly came out and disassembled the microphones. 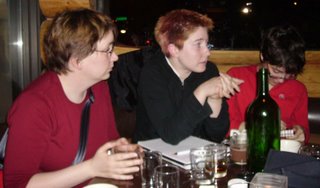 After the concert there was pie and sketching at the lounge. Here's Jenn, Erika, and Dylan. 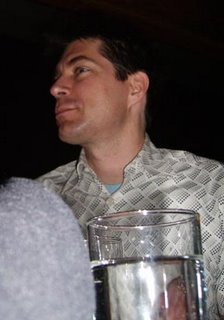 Patrick Farley was kind of tired. I guess we all were 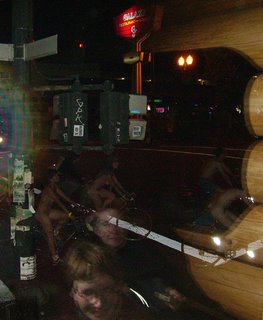 Then the naked people on bikes went whizzing by and woke everyone up. It was hard to get a clear shot through the glass, but there were at least a hundred of them, sporting body paint and hats, their odd bits flapping disturbingly. Portland had manifested some deep weirdness just to reassure Patrick that it was okay to leave the bay area and move here.

Thanks, Steve. Steve Lieber, everybody. Give him a hand.

Newsarama has a fine interview with Terry Dodson, about his recent move to be the monthly artist on Wonder Woman.

They've also got a look at Marvel Westerns: Western Legends, featuring stories by Jeff Parker and Karl Kesel. Here's a page from the story Parker wrote, illustrated by Tomm Coker and Matt Hollingsworth.

Finally, We're all glad to say that Matthew Clark's recovery is going well. He'll be back at the drawing board soon and has been doing some sketches to warm up. Several of them are up on his myspace blog.

Congrats to Jeff Parker! His run on Marvel Adventures: Fantastic Four was nominated for a Harvey Award. And for the record- there was no, repeat, NO clever Crossgen lunchroom campaign to make that happen. I honestly don't think anyone in the studio even rememebered to vote in the Harveys this year. Apparently what happened was that enough people who care about these things noticed that wild, funny, entertaining stories were appearing month in an unnoticed all-ages title, and they gave the book the nod.

CIVIL WAR: FRONTLINE #1 is out in stores this week, featuring Steve Lieber's art on the ACCUSED storyline. Find out who survived the Stamford incident! And while you're at it, find out what Steve's art looks like in a Marvel comic. The last time story he penciled and inked for Marvel shipped in 1992.

Don't forget to get your orders in for DEAR JOHN: The Alex Toth Doodle Book. The Diamond ordering code is JUN063296.

I have a political doppelganger!

It used to be, if you put "Terri Nelson, Mercury" into The Google, I came up, and you could go see stuff about comics. Now, however, The Google automatically decides you must have spelled my name wrong and you really want to know about some dude named Terry Nelson, who apparently had something to do with why Bush is president.

I'd like to rectify this confusion and so I am issuing the following press release.

NEW YORK and WASHINGTON, May 4 / -- Mercury Studio, a full-service comic book studio firm headquartered in Portland, Oregon and not in New York, today announced that Terri Nelson, who did not vote for Bush-Cheney in either the '04 Campaign or ’00 debacle, and who is also not a senior adviser to Senator John McCain (but who is not surprised, although pretty disgusted, by his complete backtracking over
his previously-stated high moral ambitions in order to please his Bush-Cheney
overlords), has joined the firm as a partner in its Portland, Oregon (not Washington, D.C.) office. Nelson's firm, Magpie Illustration, a leading grassroots illustration organization, will become an operating unit of Mercury Studio.

Friends of the studio